East Dallas Persistent Women began as a group of women in East Dallas who, with  many throughout the country, were grappling with Plan B after the 2016 election.

At our first meeting, pictured below, 10 of us — many friends from church — gathered in the living room of Trish Major, who came up with the brilliant idea that this group of women could make a difference. Our meetings always involve food (many thanks to Trish’s husband, Tracy, our designated EDPW chef) and often adult beverages.

In the beginning, sometimes just a few of us made it to the monthly meetings. We were all scattered in several directions in response to our new “woke” state. But Trish persisted, expanding the group, asking Tracy to bake more cookies, communicating via email, planning gatherings, and eventually landing on our first project: A statistical survey of a statewide program created, in theory, to replace the services Planned Parenthood had provided to Texas for many years. This just-released study is called “Healthy Skepticism: The Inadequacy of ‘Healthy Texas Women’ in 2018.”

But let’s not get ahead of ourselves.

Month after month as we formed the structure of “Healthy Skepticism,” which involved statistical guidance by a woman at SMU who grew up in our church, we brought local candidates in to meet with us, then supported them by volunteering and holding a pre-primary meet and greet for two of our favorites with primary opponents (Colin Allred and Joanna Cattanach). We also did a 5K together for the Human Rights Initiative of North Texas (a friend of ours from church runs that, too). 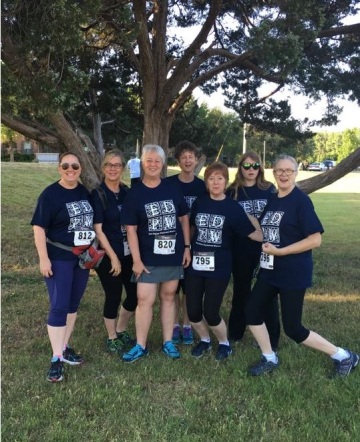 We are all busy women. We have jobs. We have families. Nevertheless, well, you know. We oftentimes gave up time with family and friends to join on Tuesday nights, to make calls to providers on a list, to cheer each other on.

We are saddened by the results of our “Healthy Skepticism” study. We wish the numbers showed otherwise. Because Texas women deserve better.

In April, we will walk another 5K together. We continue to meet on the second Tuesday of every month. Tracy continues to feed us (because even persistent women need sustenance). We hope our research helps guide the way for change in Texas.

One thought on “Nevertheless, she persisted”